What. A. Slate. It’s unbelievable how many of college lacrosse’s best blue blood programs are matching upon Saturday. The overlaps are absolutely killer though. Luckily two of these games are televised, so you can have the TV and laptop going simultaneously. What a time to be alive.

This is really shaping up to be the game of the year. Albany has lived up to all the hype so far. They are hitting on all cylinders: two highlight machines on attack, one of the top two faceoff guys in the game and an underrated D that hasn’t given up double digits yet.

Meanwhile, the Terps have shattered expectations. On offense, it’s been no Rambo/Heacock, no problem. Connor Kelly has stepped up into his new role gloriously, putting up 10 points(!) on ND last week. His headline-grabbing performance eclipsed big contributions from others stepping into new roles, including Bubba Fariman and Logan Wisnauskus, with Jared Bernhardt and Tim Rotanz still doing their thing. Gear up for a great one.

PREDICTION: Maryland in a thriller. Their freshman F/O Justin Shockey is just good enough to keep TD Ierlan from going off. Maryland has the lethal combination of winning ground balls and slowing it down offense. They control the clock just enough to outlast the Danes.

The rivalry is renewed in the Carrier Dome and there’s a lot at stake. I still believe Hopkins has a solid team that could pull it together and threaten by May. They’ve got nothing to lose and Petro will have them going to go balls to the wall. With the Orange’s Nate Soloman suspended, one of their defenseman will be freed up to pressure hard.

Syracuse will need a full 60 minutes out of their defense. Austin Fusco leads a solid unit that could be without Tyson Bomberry again, although Brett Kennedy did a great job in his place last week. However, their disjointed transition defense allowed UVA to come all the way back and tie the game. They’ll need to step it up against the veteran offense of a hungry Hopkins team.

PREDICTION: ‘Cuse by one. The only way they know. 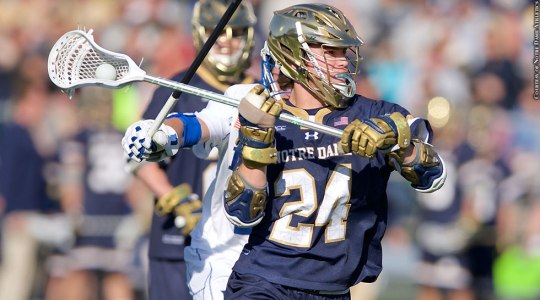 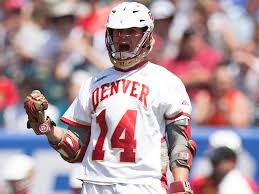 ND has my favorite attack unit in the country. Mikey Wynne might be the most underappreciated household name in college lacrosse (if that makes any sense). I saw him in person last week and he commands a lot of attention. The entire place starts buzzing every time he touches the ball. Ryder Garnsey obviously is that dude. He responded to some early time on the bench by sticking 4 goals on Maryland. Filling the last role they have Mikey Drake, a Sales boy (shoutout Delaware), and occasionally Wheaton Jackaboice, an all-time all-namer.

PREDICTION: ND is underrated, Denver is overrated. They prove it in an 11-8 win. 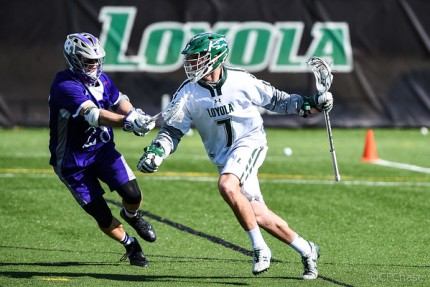 Duke’s employed its trademark, smart, methodical style and got its swagger back against Richmond last week. But Loyola could be a tough matchup for the Devils. They have only gone against one nationally-known star attackman all year, Denver’s Ethan Walker. And he lit them up for 6 and 2. Pat Spencer has to be licking his chops seeing that.

At the facoff X, neither team is above 50% on the year. But I believe in Mike Orefice for the Greyhounds. He held his own early on against UVA’s Justin Schwenk, one of the game’s best, but seemed to wear out in the second half. Look for him to have a day. Let’s just hope the announcers don’t pronounce his name “orifice.”

PREDICTION: All this being said, Duke might just end up being too much team for Loyola. Expect them to pull away late in a close one, just like they did against Denver.

0 comments on “What We’re Watching this Weekend”