Ding dong the witch is dead! This weekend Nike/STX teams across the country will dump their Stallions in the garbage where they belong, and don these brand new lids. The teams debuting this new gear include UNC, Duke and Ohio State. 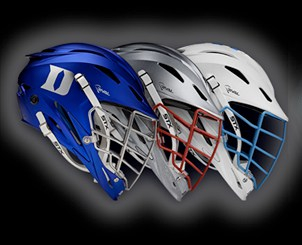 This move comes after almost three long years of the Stallion regime. They were bulky, uncomfortable and downright ugly. It was impossible to achieve proper tilt and their low backs obstructed our views of a lot of the great flow out there on Nike teams. They fell just short of the so-bad-they’re-good bracket that the old Gait space inhabited.

The Rival is undoubtedly a step in the right direction. It’s got sleek lines, enhanced ventilation and yeah who are we kidding they look good because they look like Cascade helmets. Plain and simple. It’s like when Warrior was having trouble nailing down their design so they put out the Trojan, which was literally a CPX except with more concussions!

So the moral of the story is just look more like Cascade and you’re golden. Good ya, STX, for finally figuring that out.

We’ll have to see how they look in action this weekend but for now:

and the 2012 MIAA winners got a polo from Southern Tide
𝟯, 𝟮, 𝟭, 𝗟𝗜𝗙𝗧𝗢𝗙𝗙!
but fr, would anyone cop??
BIG GOAL JOE X2! Robertson scores the OT winner again for Duke in his homecoming to Charlottesville
It wouldn’t be Thursday Night Lacrosse without #LaxBingo! UVA & Duke square off in what should be another ACC thriller!
#FreeMarist - It’s beyond time to let them play. Hope to see the Foxes back on the field asap