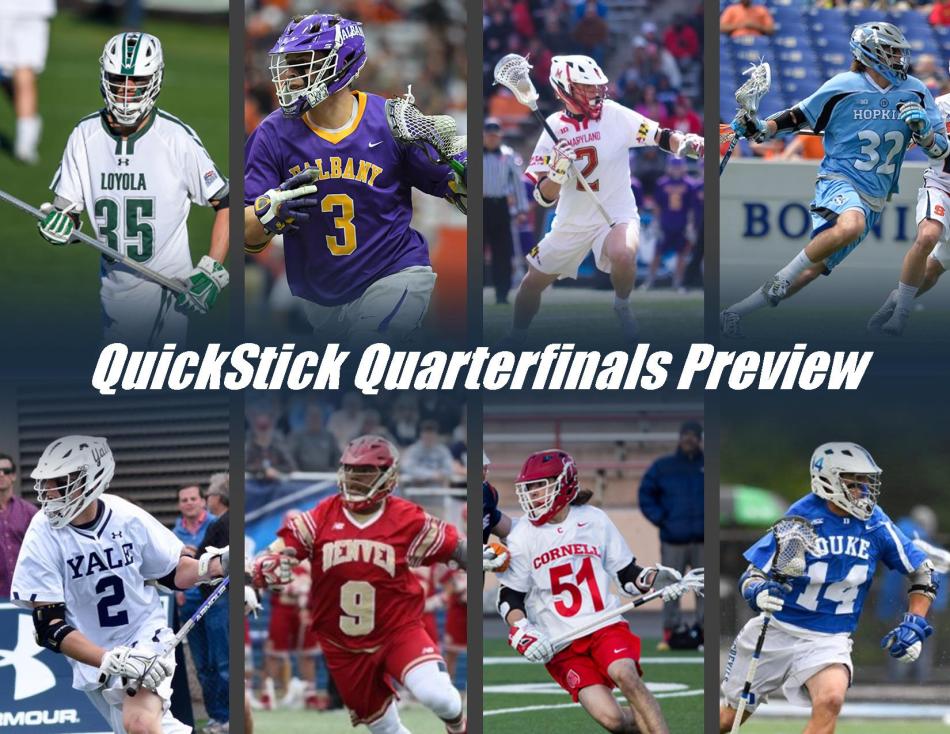 Who’s ready to have a damn weekend? Only eight teams left and they’re all contenders. And best of all, they’re playing at Navy-Marine Corps Stadium in Annapolis and Shuart in Hempstead, two of the greatest venues in lacrosse. Anything could happen this weekend so we’re here to help you make sense of it all.

The big storyline here will be Pat Spencer and Ben Reeves squaring off. Much like NFL QBs, “matchups” between attackmen get blown up despite the fact both players will be on opposite ends of the field from each other. As silly as this is, it will still be fun to see these two Tewaaraton finalists doing it on the big stage.

Speaking of silly, this Spencer goal from round one…

Last week’s game against UMass showed why Yale is the more complete team. The Minutemen came in with a simple gameplan: make someone other than Reeves beat us. So the Bulldogs turned to Sophomore A Jackson Morrill, who poured in seven goals.

I give Yale the edge at the faceoff dot too. Loyola’s Mike Orefice turned heads with his blazing speed on two goals last week against Virginia, but he was only 12-26. He’ll have his hands full against Yale’s IL All-American third-teamer Conor Mackie.

Expect Yale to pull away and win the We-Lost-to-Bucknell Bowl by a few.

Another huge one-on-one matchup, this time between the game’s best FOGOs. This game has been billed less as a game between to great teams and more as a heavyweight bout between the two men. Faceoff GOAT/guru Greg Gurenlian will be in the booth with Quint and Anish to breakdown the matchup which should be awesome.

Apart from that, these teams match up well. Both have two-headed monsters on offense: Albany with Connor Fields and Tehoka Nanticoke, and Denver with Ethan Walker and Austin French. Their styles, however, could not be more different. Denver prefers to grind the pace of play to a halt and control possession, while Albany’s offense is free-flowing and explosive.

This is a favorable matchup for the Dane Train’s shooters. Denver has been shaky in net and Albany might be the best team in the country in terms of shot placement. Denver, on the other hand, has to shoot on JD Colarusso. It takes a lot of shots to beat this guy, which could put them off their gameplan.

A snipe for your viewing pleasure:

Who brought the secret sauce?

All signs point to Albany winning but it’s also hard to bet against Coach Tierney in May. This should be a good one.

Cornell is rolling. 3-0 in the month of May including an Ivy League title and a dub in the Dome. Even when Brown and ‘Cuse keyed on Jeff Teat and kept him in check, the Big Red were able to rely on a stout D that includes two All-Ivy selections at close and another at pole.

We know about Maryland’s star-studded offense. Connor Kelly is my pick to win the Tewaaraton. He can create his own shot at will and has guys like Rotanz, Fairman, Wisnauskas, Bernhardt and DeMaio to feed. Cornell will have to keep the ball away from all these weapons as much as possible.

Cornell will need a huge game out of their keeper Christian Knight. Robert Morris tendy Chris Reynolds got off to a hot start last week and had the Terps spraying and praying. But they settled down after halftime and were able to crack him. If Knight can get in their shooters’ heads and stay in the zone, he could give the Terps some problems.

Cornell could beat anybody at this point. I’ll stop short of picking Cornell but Maryland is definitely on upset alert.

Both these teams have the keys to a May run: balanced offense, star power, coaching and most of all, senior leadership. Sunday will be the end of the line for either Guterding and Conley or Tinney and Shack. Expect emotions to run hot.

Despite the similarities between these squads, they faced very different teams in round one. Duke blew out Villanova in a game that should make the Selection Committee immediately reexamine how they decide at-large bids. Hopkins had to play the Big East champ Georgetown, a team playing with inspiration and momentum.

The good news for Hopkins is they survived and Shack Stanwick is back.

SHACK STANWICK WINS IT FOR @jhumenslacrosse 🚨🚨🚨

The final Stanwick sibling provides the game-winner in OT in his final game at Homewood. Hopkins comes back from down 8-3 to down @HoyasMLacrosse. pic.twitter.com/2cmMdb9JMh

There really isn’t enough separating these teams so I’m going with the emotional pick. A senior captain scoring an OT winner after fighting injuries is team of destiny stuff. Hopkins wins a thriller.

Teague sat down with @gatorslaxclub president @mcorazon17 for a sneak peek at everything happening down in Gainesville this preseason! 🐊🥍 Check out the link in our bio to read all about it! #mcla #clublax #alligators
what was the stunning announcement? wrong answers only
Beers with @danarestia
Let’s be real, these are the 🐐 of cleats
Who else is ready to watch Pat & Chris Kavanagh tear up college lacrosse together?
Rabil is hanging up his cleats