It was announced today that the Boston Cannons have traded Attackman Davey Emala to the Ohio Machine in exchange for Midfielder Mark Cockerton and a 7th Round draft pick in the 2019 MLL Collegiate Draft.

On paper, this is a fair trade. The Cannons sent Emala (5 goals, 3 assists) to Ohio in exchange for Cockerton (2 goals) and a future late-round pick. Cockerton was the third-leading point scorer on the Machine last season, and Emala is a solid attackman who has been a consistent starter in Boston. However, that’s not why this trade is being discussed.

The interesting part of this trade comes from a look behind-the-scenes. It was announced, by Cannons’ Head Coach, Sean Quirk, that Emala actually requested to be traded. After some deliberation and “hesitation,” as Quirk noted in his official statement, Boston ultimately complied with their cornerstone player’s request to play in a different jersey. Here is Quirk’s official statement: 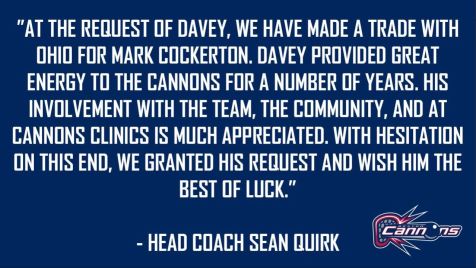 Now, this is all pretty puzzling, at least to me. Emala seemed to love Boston. He lived here, which isn’t all that common for players in the MLL to live in the cities they play in (more on this later). He was heavily involved in the community – participating in everything from youth clinics to partnering with a local brewery to create his own beer. The fans adored him, and he was a staple part of the Cannons’ offense as well.

I have to think this is a microcosm of a greater issue that is plaguing the MLL. Players are making next-to-nothing in salary to give up every weekend of their summer year after year. Sure they love the game of lacrosse, but when your team is consistently losing it can start to wear on you. In the Cannons’ last 20 games they have won just 4 of them. You can imagine that probably isn’t a ton of fun for those guys. So, with Emala realizing he may only want to play for a few more seasons, he requests to be traded to a competitor, i.e. the Ohio Machine.

The issue for teams is that there really cannot be this long rebuilding process, like the one the Cannons are going through. Players will get fed up with losing week-after-week and will either request a trade or decide it’s not worth giving up their summers. For me, this trade is almost as puzzling as the Miles Jones for Matt Mackrides trade from two years ago. No information ever really came out about why that occurred, but I would imagine it had something to do with Jones wanting out of a brand-new organization.

Overall, I think it impacts the legitimacy of the league. You’re not paying players large sums of money, so their loyalty is not to your organization. Nine times out of ten they’re loyal to their families or their careers away from lacrosse. If their job relocates them to Dallas, then I have a hard time believing they’ll be cool with flying to Boston, or New York, or Florida 14+ weekends a summer to lose lacrosse games.

Unfortunately, I can’t think of an immediate solution to this problem. It is something the league will have to address, because fans pay to come watch games that feature their favorite players. When those players leave, so do the fans.

what was the stunning announcement? wrong answers only
Beers with @danarestia
Let’s be real, these are the 🐐 of cleats
Who else is ready to watch Pat & Chris Kavanagh tear up college lacrosse together?
Rabil is hanging up his cleats
He went back up, so others could get down. We remember the hero Welles Crowther everyday, but even more so on this one