We all love Lax Twitter. We log on to debate rule changes, reminisce on vintage highlights and comment “what about my team” below literally every college lacrosse article. Amid all this noise, some elite tweeters rise above the rest. They make us chuckle. They make us think. They ruffle feathers with piping hot takes.

But who’s the best? Through a series of Twitter polls, we will determine the crowd favorite the best way we know – a bracket. Let’s take a look at the field.

Rabil’s got the most followers in the bracket and all the name recognition in the world. His social media savvy has been a major asset to the PLL. But he’s got stiff competition from Chris Jastrembski, who introduced us to #WhitneyinOT and has done hard time in Twitter jail. If Paul can advance, he will be battle-tested.

This dude drops heat on the timeline and stands by his takes, which we like.

Strong matchup here. Official lax girl has built a strong following by being effortlessly relatable and funny. Coach Pugh gets the people juiced. Seeing one of his “#REPS” posts will motivate even the laziest player to go hit the wall (or run through it). 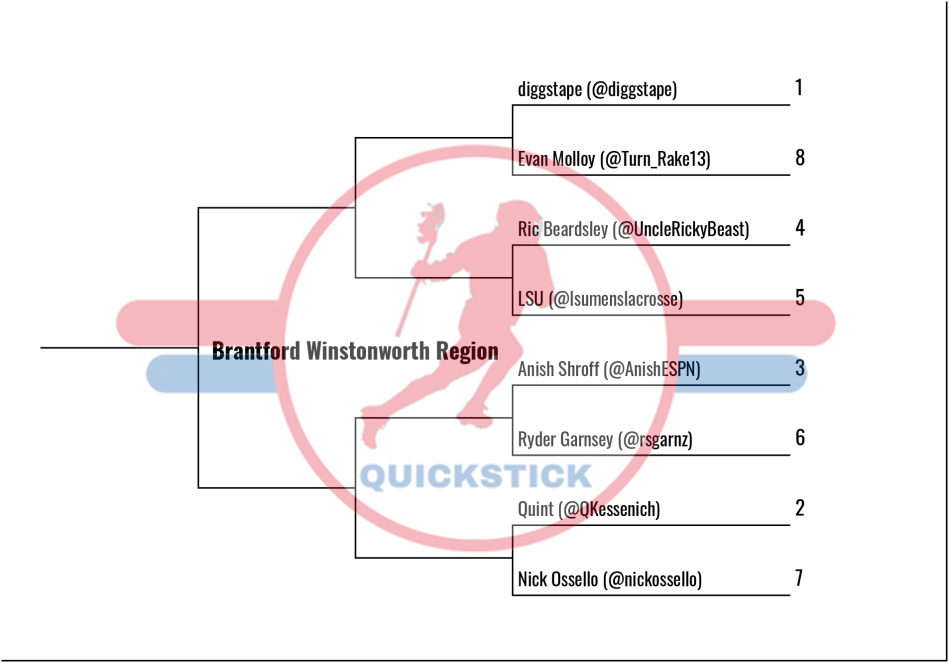 Am I biased because Quint blocked me for saying I mute my TV when he calls games back in 2013? Maybe. But Nick Ossello is a Lax Twitter heavyweight. His #NegativityFridays help us get all the hate out of our hearts. And he’ll debate anyone on anything. If his Twitter style is any sign, he won’t go down without a fight.

UGA may have started the club lax movement on Twitter but LSU has made it their own. Here’s a taste:

the levees here are massive pic.twitter.com/EQxaDKluFV

you probably just left the city but come relive your poor decisions while we play advanced jellyfishing pic.twitter.com/CP7PykCoeL

the other team put more balls in the net than we did which apparently means that we dont win. next time we will review the rule book and change the game plan accordingly

One look at Anish’s page and you can see that he’s just a pure sports fan. That’s something we can all relate to. He also has an adorable kid. But Ryder Garnsey has never been one to back down from a challenge, so I doubt that blue check will scare him. He posts as scrappy as he plays. And his “Redskins are a lock” tweets every football Sunday are pure comedy.

Patrick McEwen brings a unique approach to debating online. He’ll drop his takes and back them with facts and figures that make our brains hurt. He lives to dunk on dissenters. But he has drawn an equally fiery round one opponent in Mike Flanagan, who brings that Masshole grit to the timeline every day. Is the base he has built back on New England strong enough to knock off an IL employee? We’ll see.

Flanagan is known far and wide as a straight-up beast on the field but he’s not afraid to lay the lumber online too. As MLL Players’ Association President, Flanagan stuck up for the players and exposed some of the dysfunction behind the scenes in pro lacrosse. He’s built up a lot of goodwill from doing so and it could propel him in this bracket.

If you’re in the market for storylines, Drake Porter was on Jordie’s podcast just 2 months ago. I’m sure we’ll see solid trash talk between these two. 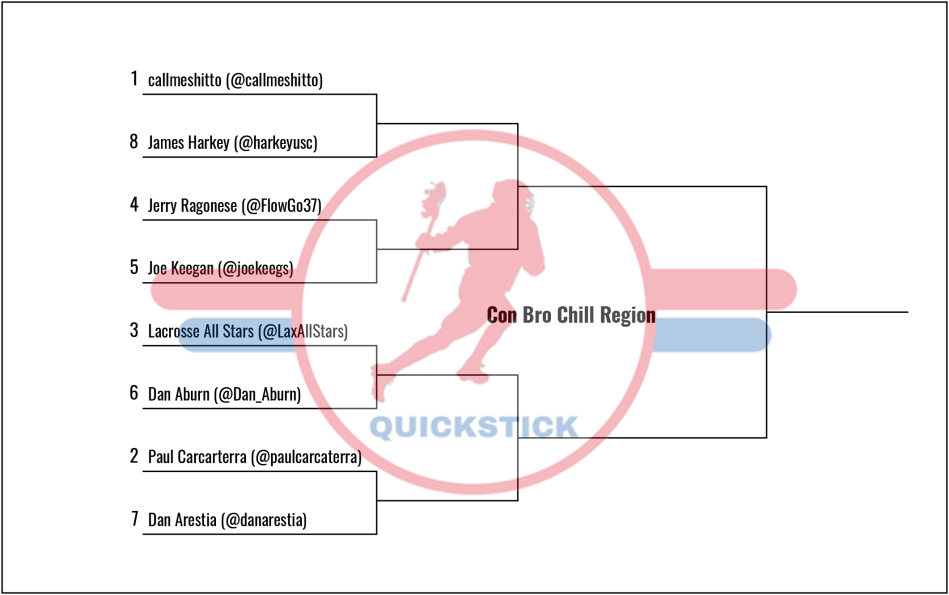 I’ve loved reading Lax All Stars for years. They’re a must-follow for anyone involved in lacrosse. All that said, Dan Aburn may win this whole tourney from this tweet alone:

Hello and welcome to another College Lacrosse Saturday 🥍🍳🥂 pic.twitter.com/93dWWOESqT

FlowGo37 posts always put me in a good mood. He’s weird like every FOGO you’ve ever played with but in a fun way. Also the fact that “flow” is still in his handle despite him being totally bald is hysterical.

The matchup to divide Connecticut pits lacrosse’s cool uncle against Danny scoops. Dan is an absolute grinder on here and has trap game potential for Carc.

0 comments on “Previewing Round One of Lax Twitter Madness”