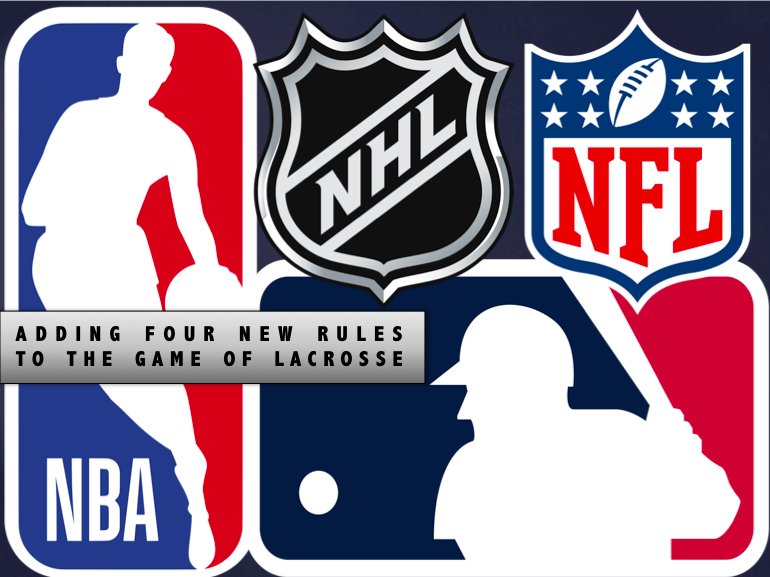 With post-quarantine sports winding down, it’s officially #HypotheticalSZN. This season usually comes to us in the middle of the summer when we only have the same double-play highlights on Sportscenter Top 10 over and over baseball to consume. Therefore, in the spirit of the season, let’s add some hypothetical rules to our beloved game from each of the “Big 4” sports (basketball, hockey, football, and baseball).

We start with the biggest of the four: football. I lean towards adopting the “Intentional Grounding” rule, where if the quarterback intentionally throws the ball down, while still within the tackle box, with no receiver in the area it’s a penalty. How would this translate to lacrosse? I think you apply it to when the shot clock is below five seconds and teams intentionally roll it to the corner to bury the opposing team deep and start to make subs.

I will acknowledge that, by the letter of the law, it is a good strategy and I would coach my team to do the same thing. My problem is not with the players, but with the rule itself. How much more exciting would it be if that became a penalty and the opposing team was given an automatic fast break? Just like you used to see in youth summer tournaments instead of serving penalties. Not only would it speed up the game, but it would also force the offense to try and make something happen quickly, which could lead to unexpected goals or a fast/slow break going the other way. I’m already picturing some wild end-of-shot-clock finishes. Again, the current rule isn’t a glaring blemish on the game, but adding more speed couldn’t hurt.

Moving right along to basketball, I think the “and-1” should become a thing in lacrosse. As I’m sure you already know, in basketball, when the shooter is fouled on the shot and the ball still goes in the shooter receives a free throw to make it a three-point play. Now, picture adding that to lacrosse. A player is driving to the net, gets pushed from behind and puts the ball in the back of the net while falling to the ground. Normally, the flag would go up in the air, but the goal would nullify the penalty. What if it results in a “free shot” kind of thing like the 8-meter they have in the women’s game? A scenario where the defenders start a step behind the offensive player with the ball, and upon the ref’s whistle they all converge on the net.

Just as it is in basketball, this would be a huge play and have the potential to tilt the momentum heavily in one team’s favor. Plus, you could add it on top of the already-established two-pointer. If a defender finishes his check high and the two-point shot finds twine, you now have a look a three-point play.

Next up: hockey. There are already a good amount of similarities between the two sports, and they compliment each other well. One rule I would love to see brought to lacrosse is pulling the goalie and allowing a 7-on-6 set. This can even be extended to a delayed penalty/flag down situation. You have your team possess the ball, and wait for your goalie to sprint off the field and it allows for an extra offensive player to join the set until the defense touches the ball.

I can’t help but think how exciting those final possessions would become if you turn them into an EMO (extra man opportunity). The difference between hockey and lacrosse, in this case, is that if the defense in lacrosse manages to grab a loose ball or pick off a pass, they can sling it down the field at the wide-open net with no repercussions. In hockey, if the shot misses, resulting in an icing, the puck starts right back down in the defense’s end, but in lacrosse it becomes a footrace to the end-line between the attack and long poles. Talk about a hustle stat.

Finally, we move to baseball. This one was by far the easiest to think of. It’s time to make lacrosse coaches dress up in full pads and uniform just like baseball managers do. How great would it be to see the entire coaching staff suited up for a game they will not be playing in, just like Jameis back in his Florida State days?

Kidding! Baseball managers dressing up in full uniform has to be the strangest/funniest “rule” in sports. In all seriousness, due to the two games being drastically different, there wasn’t a rule that jumped out at me to add into lacrosse. So, we’ll just leave it.

So there you have it. Three rules from three different sports that would make for exciting, yet completely hypothetical, additions to the game of lacrosse. If there are any obvious ones I missed feel free to let me know on Twitter @k_orourke15.