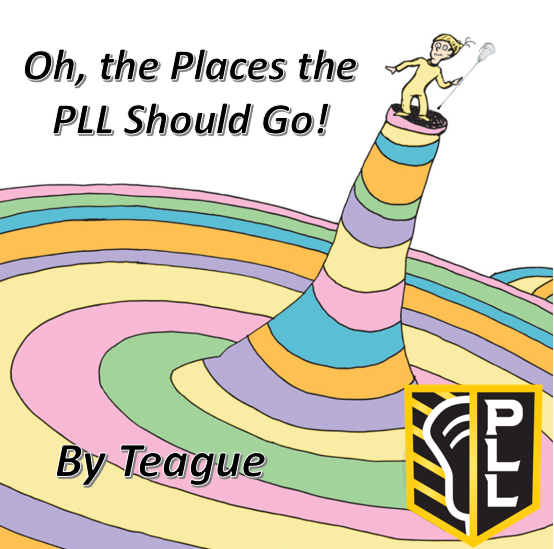 Hello all, long time no blog! Happy New Year to all you dedicated readers. I have been a little busy trying to find employment during a global pandemic which unsurprisingly has not been the most enjoyable experience. I’d love to tell you all about my new job but this is a website about lacrosse, NOT the trials and tribulations of a purchasing associate for an air purification company.

There will be 11 weekends of games this summer presumably with limited fan capacity in the stands due to varying COVID-19 restrictions across the country. The locations of the games have not yet been announced so I’ve made a list of the 11 new cities and stadiums I’d like to see visited in this year’s PLL season that they have not played in before. I consulted the rest of the QuickStick team and the subreddit r/lacrosse to get some differing opinions so I’d like to thank everyone for their input. Except for the smart ass on Reddit who suggested Barrow, Alaska. I did not think that was very funny or helpful.

Please note that this list is in no particular order. I have included quite a few larger NFL stadiums which would help with spreading out the crowds in order to maintain proper social distancing.

A stadium I have weirdly driven past on 5 separate occasions despite living in Connecticut and North Carolina my whole life, Lucas Oil would be a great venue to give midwestern lacrosse fans a chance to see the game played at the highest level. Having previously hosted the NCAA quarterfinals, Indianapolis is no stranger to lacrosse. The PLL got a good turnout when it visited Chicago and Columbus and I expect a similar outcome in Indianapolis. Although I personally do not have the best lacrosse memories in the state, (got smoked by Davenport and IU then got my ID bent). I think the PLL will enjoy their time a bit more. If you ever find yourself in Indy, I encourage you to check out The Soldiers and Sailors Monument and the Eiteljorg Museum of American Indians and Western Art.

The Southeast is an underappreciated hotbed of the sport that continues to grow every year. Trust me they are playing some great lacrosse down there, not just at Duke and Chapel Hill. This is coming from a guy whose team finished last in the SELC so you can trust me on this. What better place to visit than the 2nd largest city in the region and the 3rd fastest growing city in the country? All I’m saying is the state that brought us the goalkeeping extraordinaire McGehee Porter deserves a visit from the PLL.

The PLL in Paradise, it’s got a nice ring to it. Las Vegas is becoming more relevant in the sporting world every year and hosting the PLL could offer this brand-new stadium an opportunity to cement itself as THE lacrosse destination of the Southwest. An ambitious crossover but one I would love to see. I don’t think any of the players would complain about a weekend in Vegas. Well, the fun ones wouldn’t at least. Although Nevada isn’t the first place you think of when someone says the word lacrosse, the PLL’s visit could help popularize the sport in the region and #growthegame.

BC Place – Vancouver, BC

More games in Canada! The Pacific Northwest is crying out for a PLL weekend. Recently renovated and home to a variety of Vancouver professional sports this multi-purpose stadium would be an ideal venue to host the PLL. While this summer’s Canadian visits could be unrealistic due to closed borders, the PLL should definitely consider increasing their presence in Canada. Even if they don’t listen to my expert advice, I’m still definitely going to a Whitecaps game as soon as its safe to do so because this stadium looks cool. Maybe it will serve as the final stop on the trans-Canada road trip I have planned.

Lax in the Twin Cities, what a sight to behold. Another new stadium that looks amazing, U.S. Bank is exactly the type of venue the PLL should be dying to play in. Minneapolis is a location that will attract fans that might not be willing to drive all the way to Chicago but still want to see lacrosse played at this highest level. I expect a great turnout in the Land of 10,000 Lakes. I had a layover in MSP 2 years ago and the airport had a train which is a win in my book.

While my list has been NFL stadium heavy thus far, MSL and other soccer stadiums are perfect for the PLL. They are smaller which better reflect the PLL crowd expectations, presumably cheaper to use, and give a better viewing experience for the fans. Toyota Stadium, which has a capacity of 20,500, is on the larger side of MLS stadiums and could give the PLL a great foothold in Texas. As I touched on earlier the South has many lacrosse fans, many of whom reside in Texas. While there is some contention about where in Texas the PLL should visit (it’s pretty big you know) I think a yearly rotation of DFW, Houston, and San Antonio could work well for them. It’s just a shame they can’t play in the Astrodome and channel their inner Mike Winchell or Boobie Miles.

I may be biased as I went to the NCAA quarterfinals here back in 2014 and witnessed the best live lacrosse of my life. Click here to see some highlights. I think Hofstra’s stadium is a great venue to bring lacrosse to the tristate area that may be a bit more accessible for Long Island fans than Red Bull Arena or MetLife Stadium. With a capacity of nearly 12,000 this could be an excellent opportunity for the PLL to sell out, pack a stadium, and really get the place rocking. (Pending COVID restrictions of course).

Un jeu á Montréal? Pas possible! Like I said earlier, I want more Canadian weekends in the PLL. Home of Club de Foot Montréal, formerly know as the Montréal Impact (Who knew they changed their name? Since when is Victor Wanyama on this team?) this is another MLS stadium the PLL could make great use of to grow their brand north of the border. It is the 2nd largest soccer-specific stadium in Canada per its Wikipedia page (where I did most of my research for this article) and could be a perfect fit for the PLL in their northern ventures.

Why don’t the Yale lacrosse teams play here? Well, whatever I think the PLL should visit the Nutmeg State. New Haven is very accessible to many lacrosse hotbeds and I expect many fans to attend. I’m getting CONNY flashbacks just thinking about it. The history of the stadium and the school would create a great narrative and raise the stakes of any games played there. On a more selfish note, I’m not dying to drive to Red Bull Arena or Gillette Stadium so come on guys I made you this list, come to Connecticut. While you are here, I suggest you visit the PEZ museum in Orange, CT which is close by and it is absolutely electric.

Kyle “Snowflake” O’Rourke gets all the credit for this pick. The PLL would be wise to partner with the service academies on their yearly jaunts around the country. Colorado is the lacrosse epicenter of the West and after playing in Utah exclusively last summer the PLL has laid the foundations for a large following out there. A strong partnership with our armed forces could do wonders for the PLL brand and flyovers before sporting events are really cool. Next logical steps in this pattern are West Point and Annapolis. The Merchant Marine Academy and Coast Guard may lack the necessary sporting facilities at this moment in time, but the PLL making its way through Great Neck to Tomb Field could be a sight to behold.

As we all must do at one point in our career, the PLL should take their talents to South Beach. Miami has hosted a plethora of major sporting events and is home to many collegiate and professional teams. Once it opens, this exciting new venue in a historically underserved lacrosse region could be a great destination for the PLL. I can see a visit to Miami doing wonders the growth of the PLL brand in the Sunshine State. It’s always a good time down there, and they should get in on the party. I recently visited en route to the Everglades before the world went to shit, and despite my grandfather vetoing my choice of a Cuban restaurant in favor of a less than stellar sports bar, I enjoyed my stay. I highly suggest visiting Skunk Ape Research Headquarters if you ever go to the Everglades or find yourself in Southern Florida.

There you have it! These are my suggestions for the new places the PLL should visit. Are they all realistic and feasible? No, but I don’t really care. You are welcome for the free labor PLL. In order to thank me, give the fans what they want, no matter where they are on the continent.

0 comments on “Oh, the Places the PLL Should Go!”

bedroom goals 😍
so when can Nakeie officially be on Heisman watch??
You get the ball and this dude’s covering you, wyd?
Throwback to when Adam Sandler went on The Tonight Show rocking a Hofstra lacrosse shirt
Just two guys who now coach lacrosse together in upstate New York
Imagine rolling up to Hofstra and seeing @stufeiner coaching on the other sideline